Negros Occidental, known as the ‘sugar bowl’ of the Philippines for its vibrant sugar industry, was not spared by Super Typhoon Yolanda.

As it struck Western Visayas, the towns of Northern Negros Occidental including Manapla, Cadiz City, Escalante City, and Sagay City were badly affected.

The Provincial Government estimated that almost 113,000 Negrenses sought refuge in 193 evacuation centers across in 29 cities and municipalities. The typhoon also flattened huge swathes of the agriculture (rice and corn), fishery and sugar industry.

In Cadiz City, situated in the northernmost part of Negros Occidental, gale-force winds and heavy rain felled trees and electricity poles, cutting power to much of the municipality. The local municipal hall, along with more than 70% of homes, were also damaged.

Rolando T. Lumanas, a local carpenter and maintenance construction worker, remembers the challenges that emerged in the immediate aftermath.

“The extent of the devastation made it hard for us to determine where to start our rehabilitation,” he says.

Yet in some respects, RAY DILG funds provided key opportunities to rehabilitate buildings that were long since in need of repair.

“Before Typhoon Yolanda came, the situation in our workplace (the municipal hall) was very sad,”  he says. “Our motor pool and engineering office were old structures in need of repair and maintenance. Then, Yolanda came and devastated the building, and our office was not workable since there was no roofing to shade us.”

Soon after, repairs supported by RAY DILG funds began. “It was implemented smoothly,” Rolando says. “First, we transferred to another building while construction was underway. The contractor also installed barricades and measures in the site to ensure our safety.

“Once repaired, our staff were thankful to have such a new and pleasant working place. Now staff and clients can now transact their business efficiently. 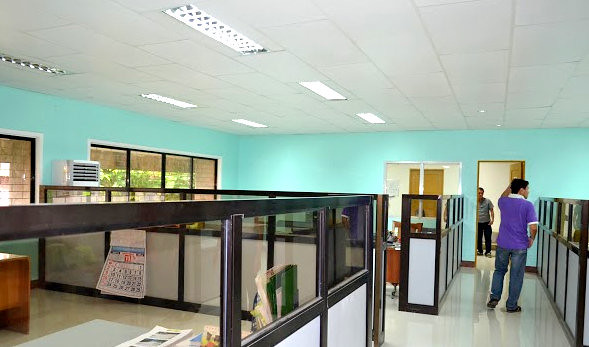 The new painting in the building also brightened up the whole office. Most of the colors in our building are pastel colors- pink and light green. It looks cool for an engineering office!”

With rehabilitation comes hope for better preparation. “I hope that our new building can surpass another typhoon, because it’s more resilient, compared to the previous structure.

We really pray that calamity with the same strength as Yolanda will not come and harm our community again. But, we are more prepared now – early warning and advisory are in placed in preparation for upcoming calamities.”